What really belongs in the bay?

Cancer is running rampant in the fire service. Adjustments to what you keep in your apparatus bay plays in a big part in cancer prevention efforts.

Bunker gear has been stored somewhere other than next to bunks for years and general principles prevent gear from being stored inside living quarters. While it's true that toxins are kept out of living areas, what about in your station's bay?

It's firefighter tradition to have a bay table or lounge area, a combination of apparatus bay and casual 'living' space. 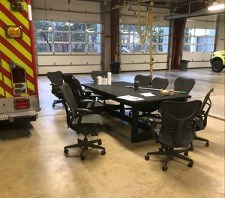 In a FireRescue1 article, author Mike Hauser states, "In the Boston study, particulate matter less than 2.5 millimeters in diameter was measured, and continuous monitoring was conducting to measure for particle-bound polycyclic hydrocarbons (PAH), which, according to the EPA, are carcinogenic. The study identified that concentrations of particulates were higher in the apparatus bay than in other areas of the fire station. The average concentration of PAHs present in the apparatus bays was 29.5 mg/m3, but OSHA’s permissible exposure limit (PEL), which is the amount an individual may be exposed to over 8 hours per day for a total of 40 hours per week, is 0.2 mg/m3. Firefighters often work 24-hour shifts for an average of 48 or 56 hours a week, which is a significantly longer period than what is covered by OSHA’s PEL."

Not all traditions are meant to last, and it is time to consider separating your station's bay and your lounge area.