Firefighter cancer and prevention message from the Health & Safety Committee

January has been designated as Firefighter Cancer Awareness Month by the International Association of Firefighters. A NIOSH study identified that firefighters have a 9% greater chance of being diagnosed with cancer and a 14% greater chance of dying from cancer than the general U.S. population. The study determined substances can be inhaled or absorbed through the skin through numerous routes. This can include but is not limited to operating at the scene of a fire, exposure to contaminants on gear and in the cab of the truck and in the firehouse, where idling fire trucks produce diesel exhaust. 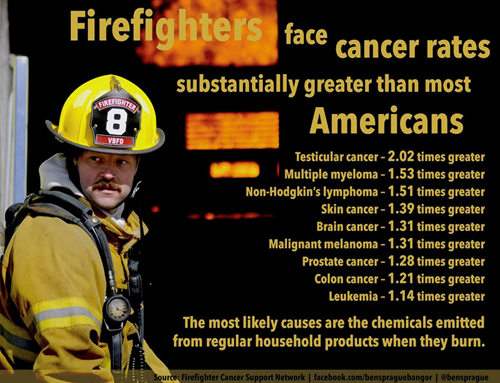 To protect yourself from exposures, the following actions are recommended:

For more information on your Associations' efforts in cancer education and prevention as well as the Firefighter Health Care Benefit Plan (S.1071) that was signed into law on September 28, 2020 visit the Health & Safety webpage.