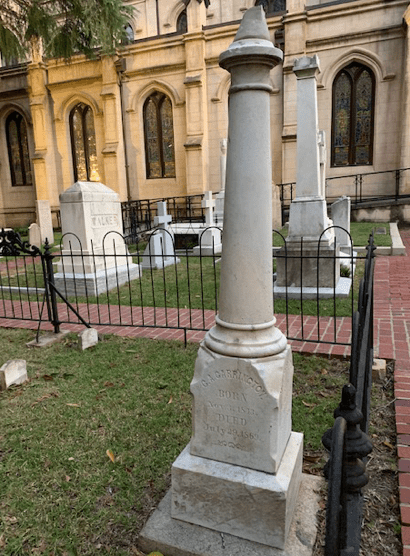 Trinity Episcopal Cathedral’s graveyard is located at 1100 Sumter Street across from the SC State House in Columbia. As you enter the front gates, turn left. The Carrington family plot is surrounded by a small wrought iron fence.

During the early cold morning of Monday, Dec. 14, 1868, a fire was spotted after 2 a.m. at the southwest corner of Richardson (renamed Main Street sometime in the 1890s) and Taylor streets. The site was a newly built three-story building known as “Gregg’s Hall.” The fire scene was just two blocks away from Carrington’s fire station. The fire started in the “Exchange Restaurant.” It was located in the rear of Gregg’s Hall and, according to The Daily Phoenix, sold “eatables and drinkables.” Within minutes, the entire building was “wrapped in flames.” After arriving on the scene, the firefighters quickly realized they were unable to save the building but needed to prevent the fire from spreading. The article states a squad from the Independent Steam Fire Engine Company (assisted by several citizens, including Mr. Squier) “were endeavoring to get a stream in the rear of the burning building, when the south wall of Wearn & Hix’s picture gallery fell, completely crushing the life out of two of the men” and injuring several others. The two men killed that day by the falling wall were Daniel Carrington and Frazer Squier. The newspaper described Danny Carrington as having “a genial temperament and 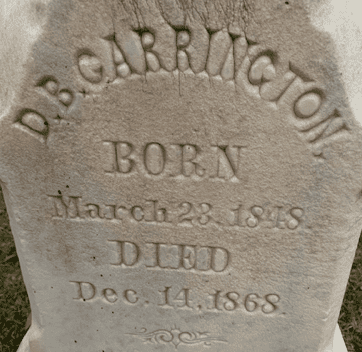 pleasing manners, and was a great favorite with all who knew him; and was a member of the Independent Fire Company.” The “volunteer citizen” who died during that early morning fire, Frazer “Frazee” Squier, was about 19 years old. He was a “modest, unassuming lad and a dutiful son – a prop and stay to his parents in their declining years.”  “The Work of the Fire Fiend is Complete” News spread quickly about the deaths of these two young men. The media coverage of the fire and subsequent dual funeral was widespread and articles of their deaths were printed in newspapers across the state. As The Daily Phoenix stated:

“The sympathies of the entire community are with the afflicted families – their loss has certainly been terrible. Mothers, fathers, sisters, and brothers, brought to sudden grief – the accident which deprived the unfortunate young men of their lives having occurred within half an hour of their arrival on the ground. Truly, ‘in the midst of life, we are in death.’”

The newspaper reports indicate that by 9 a.m., seven hours after the firefighters responded, the “work of the Fire Fiend is complete.”

“A portion of the bare walls is all that is left of a once handsome building. The firemen (with the exception of the squads on duty) have gone to their respective homes, to snatch a few hours of necessary repose, after their arduous labors.”

Not much was left of the new and prominent building as grief settled upon the citizenry. However, Columbia City Council took notice of the fire and subsequent deaths to call for an inspection of walls and prompt installation of an alarm bell. The Daily Phoenix reported:

“This is the first accident of a serious nature which has ever occurred at a fire in Columbia, and it behooves those in authority to inquire minutely into the matter, and cause a general inspection of walls – as is the case in other cities – so that firemen may be warned of danger, and not be compelled to run the risk of losing their lives in their gratuitous endeavors to save the property of their fellow-citizens.”

“One and All” As previously mentioned, a dual funeral was planned by the City of Columbia. Council members were invited to be part of the procession. Additionally, the newspaper also encouraged attendance of “one and all.”

“It is hoped and believed that there will be a general suspension of business this morning, as suggested by the city authorities, so that one and all can attend the funeral of these young men, who lost their lives in the public service. The city and church bells will be tolled during the passage of the procession to the place of interment.”

A vivid description of the funeral was printed Dec. 16, 1868, in The Daily Phoenix. It describes businesses being closed during the rainy day, bells tolling, and flags flying at half-mast. 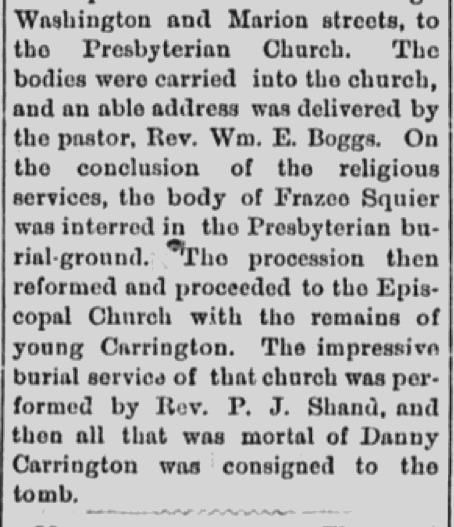 In a show of support, all classes of citizens gathered to “march” from City Hall, forming a procession, to the home of Mr. Carrington “where the body of his son was taken charge of.” The crowd continued its mission. Hundreds solemnly walked in cold, rainy weather through the downtown streets of Columbia to the Squier residence “to receive his son’s remains.” Everyone then walked to First Presbyterian Church for the dual service. Afterwards, a burial for Squier took place as he was “interred in the Presbyterian burial ground.” The procession then reformed. They walked less than half a mile to Trinity Episcopal Cathedral with the remains of young Carrington. Afterwards, “all that was mortal of Danny Carrington was consigned to the tomb.”