The Foundation was established to support our state's firefighters through the tough times so that they can return to doing the work they love. We understand that injuries, illnesses, hardships, and unexpected bills happen, and we are there to help.

Just ask Robbie Holloway, an Engineer at the Gantt Fire Department in Greenville, South Carolina, and a member of the fire service for over three decades. It was discovered during a routine department physical in early 2021 that his iron levels were low and he was advised to see his doctor.

He was treated for an iron deficiency, but the treatment wasn’t doing the trick.

Holloway, despite having had a colonoscopy in 2019, advocated for further investigation into his iron levels and another colonoscopy was performed. 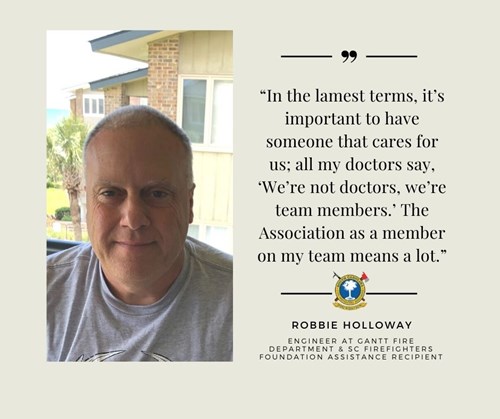 Being diagnosed with cancer is a day no one thinks will come. The South Carolina Firefighters Cancer Healthcare Benefit Plan was passed in the recent legislative session but only covers diagnoses after July 1, 2021. Holloway’s diagnosis came just two months earlier.

“When we joined the Association, I thought we were joining just for the meetings,” said Holloway. “In the lamest terms, it’s important to have someone that cares for us; all my doctors say, ‘We’re not doctors, we’re team members.’ The Association as a member on my team means a lot.”

Holloway uses the money provided by the Foundation to pay for medication and office visits. He is on the road to recovery and has one more treatment left.

“I absolutely view the Foundation and Association differently now. It’s one of those things that you never think about until you need it, and I am thankful to have it.”

You can help support firefighters like Robbie by donating to the SC Firefighters Foundation, a 501(c)3 non-profit organization. All donations made to the foundation are tax-deductible.