Carter to speak at the museum's upcoming Sept. 28 event

Carter Jones' article for the July-August edition of the Elloree Heritage Museum and Cultural Center's newsletter can be read in its entirety below. Carter, Special Projects Coordinator at the South Carolina State Firefighters' Association, will be at the museum on Sept. 28 at 7p.m. to present a program on fires, fire equipment, and firefighters of the past. All firefighters, active and retired, are invited to attend. The event is free but registration is required. Call 803-897-2225 to reserve your seat.

On a warm summer night, a young boy, hardly twelve years of age, lay sound asleep and cooled by a slight breeze blowing through an open window to his bedroom.  Sometime around 1:00 or 2:00 in the morning, the silence of the night was disrupted by the eerie resonance of the small town’s siren blowing in the distance announcing an alarm of fire.  Before the siren could complete its initial cycle of transmission, the lad was awake, and on his feet, struggling to find his slightly worn jeans, socks and tennis shoes in the darkened room.  Trying not to make the slightest sound which might rouse his parents, he unlocked the window screen and carefully climbed out its opening into his backyard.  Running to his bicycle, parked in the front yard flower bed, the youngster climbed on board his high mileaged bike and was off to the fire station where he was sure to find the location of the fire.

Down the hill, past the Methodist Church, taking a right on Rigby Street, then a left on Main Street, the boy spotted the unmistakable glow in the sky on a side street that could only be generated by a well-involved house fire.  With his heart nearly pounding out of his chest, the “want-a-be” fireman stopped at the corner just in time to watch his heroes, the volunteer firemen, begin pouring water on the fire blazing through the roof.

Well, it’s just a memory now, but a memory that is clear as if it were yesterday, for that young boy was me.  Over the years I put a lot of miles on that timeworn bicycle racing all over town chasing those fire engines and cherishing each moment spent hanging around my heroes who kindled (no pun intended) in me the one desire to grow up to be a fireman. 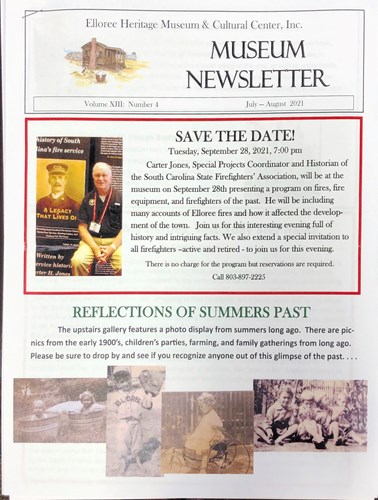 My dream did come true, and now as I complete my fifty-fifth year in the fire service, I am grateful for the opportunities that have allowed me to work in the greatest job in the world.  Today, I am employed by the South Carolina State Firefighters’ Association as their Special Projects Coordinator and resident Historian where I research the stories of the fire service…past and present.

Very recently I was introduced to some delightful and wonderful folks from Elloree with whom we have much in common…history and its preservation.  As a result of our meeting and conversations, I have begun some research into the evolution of the Town of Elloree’s fire department and the challenges the town faced during those early days of its growth to protect its citizens from the “Fire Fiend,” as it was called back in the day.  In every village, town and city in our state, during the 18th and 19th Centuries (and even into the 20th Century), the frequency of unwanted fires usually forced their citizens and leaders to begin to address the issues of fire protection.

In those days, construction methods utilized wood as the most ideal material with which to build their structures, primarily because it was the most readily available commodity. Houses and businesses were often built close to each other.  Also, their sidewalks, out buildings, fences, sheds, churches and schools were all constructed of wood and allowed the smallest of fires to spread rapidly throughout these types of exposures.

The Town of Elloree was no different.  On the 5th of April, 1887, just one year after the town was chartered, “about three o’clock on the afternoon, a fire destroyed two outhouses on the place of Edward Pauling.  Had it not been for the assistance of the neighbors, other houses would have been destroyed.”  This article appeared in The Times and Democrat, and in the same edition of the paper, the editor made some interesting points about fire protection.  “Would it not be well for the people of this place to take the many recent fires in the State as a warning and urge the necessity of more fire cisterns?  Or, will they wait until valuable property is destroyed and then have a better supply of water?”

During the early beginnings of Elloree firefighting was limited to very primitive means of extinguishment, ie buckets of water, axes, shovels, wet blankets, pine tops and various other restricted techniques.  The citizen volunteers of Elloree were put to the test on April 17, 1889, when the store and its entire stock of goods belonging to Mr. J. C. Harmon were destroyed by a fire.  And, over the years other disastrous fires claimed much valuable properties.

However, in the March 16, 1898 edition of the Times and Democrat, the correspondent wrote “Elloree has very sensibly organized an efficient fire department.  It consists of two hook and ladder companies.  No. 1, which is composed of white citizens, is officered as follows: E. H. Snider, President; H. W. Scarborough and J. W. Zeigler, Directors; W. F. Stokes, Secretary and Treasurer. No. 2, which is composed of colored citizens, is officered as follows:  P. L. Green, President; J. E. Windham and Sam Stephens, Directors, Aleck Williams, Secretary and Treasurer, Mr, Jas. R. Tucker has been elected Chief of the department by City Council.”  Note: These “Hook & Ladder” companies utilized wagons outfitted with an assortment of ladders, axes, ropes with hooks (for pulling down walls), canvas tarps (for spreading over contents), early fire extinguishers, and lanterns for night-time duty.  These wagons could not pump water.

The Town apparently enthusiastically supported their newly formed fire department as evidenced in an article the next month in the Times and Democrat.

“A novel entertainment, something cut of the usual order, which will charm and astonish the people, will be given by the Elloree Hook and Ladder Company and their lady friends about the middle of May.  Grand and expensive preparations for same are now being made.  A full brass band from Charleston will be one of the features.  It will surpass anything ever seen here before.  Everybody in the county is heartily invited to come.”

Apparently, the peril of fire and the prodding of citizens captured the attention of Elloree’s governing body over time.  It was one thing to have two hook and ladder companies serving the citizens, but without a machine to pump water on a fire, extinguishment was often not possible.  The Sumter newspaper, The Watchman and Southron, announced on June 7, 1899 that “The Town of Elloree is negotiating for the purchase of the old Wide-Awakes fire engine.  The engine is an excellent machine, though it was in service for many years prior to the erection of the water works system in this city (Sumter), and it will afford protection against fire in Elloree for many years to come, if it is kept in repair.”  Most probably this fire engine was a hand-drawn, hand-pumped “tub” which could pump water from wells or else filled with water by a bucket brigade.

Whether the town ever actually purchased the engine from Sumter is unknown because five years later, The Times and Democrat reported on December 14, 1905 that “the Town of Elloree will soon have a well-organized fire department with a good fire engine and buckets.  Good for Elloree.  She will find a fire department a very convenient article.  We hope, however, it will be a long time before the services of the new fire department will be needed.”

One of the most limiting factors for extinguishing fires was the general lack of an adequate water supply.  The town had many private wells and a couple of public wells located throughout the built upon area that were used by citizens in throwing buckets of water and wet blankets on fires that plagued the community.  However, The Times and Democrat published on July 2, 1910 that the Town Council was finally taking steps to remedy the issues of inadequate water supplies.  “A majority of the free holders of the Town of Elloree, South Carolina, did on the 21st day of May, 1910, file with the Town Council of Elloree their petition praying to order an election to be held by said Town Council for the purpose of ascertaining from the registered qualified electors whether the town shall issue coupon bonds in the sum of five thousand dollars for the purchase, erection, construction and operation, within the corporate limits of a plant for a Water Works plant.”

Even with a water system and a functioning fire department, The Town of Elloree suffered from many fires and disasters over the years.  There was the railroad platform fire in October 1910; Trinity Lutheran Church fire in August 1913; the “fearful cyclone” of May 1915; a major fire on Main Street shortly after the tornado of 1915; the Dispensary fire of December 1915; three major fires in February 1916; major forest fires threatened the town in 1920; that same year stores were destroyed in another fire; and in March of 1924 a fire “in the heart of the business section” wiped out a number of structures.  Throughout the next couple of decades, the Town of Elloree continued to be menaced by numerous other fires and caused significant financial losses and hardships for its citizens.

However, not to be disheartened, the town always seemed to recapture its determination to build back what was lost and grow the settlement founded many years earlier by William J. Snider…”The Home I Love.”  Those early firemen,  led by Chief James R. Tucker (the Town’s first fire chief), served as mentors for the next several generations of firemen who followed in the munificent tradition of service.  Those selfless volunteers who serve today, under the leadership of Chief Craig Hill, are the mentors of tomorrow’s firemen…my heroes!