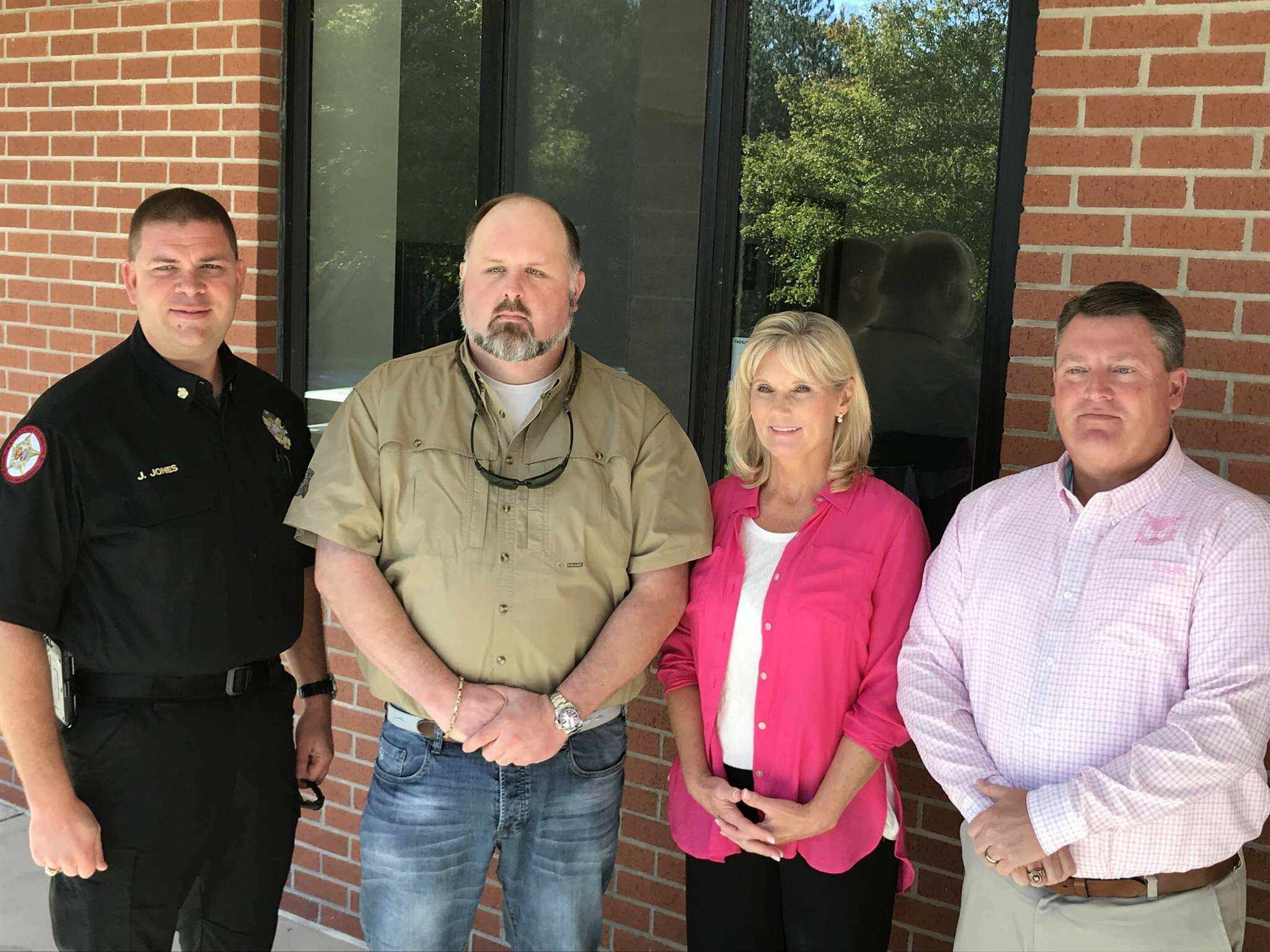 Columbia, S. C.: At the South Carolina State Firefighters’ Association quarterly training program and business meeting held on Wednesday at the S. C. Fire Academy, the group of nearly 200 firefighters from across the state were introduced to Nichols Mayor Lawson Battle and Town Administrator Sandee Rogers.  The pair traveled to Columbia to simply say “Thank You” and express appreciation to the firefighters and first responders who were deployed to Nichols when Hurricane Florence brought with it devastating floods.

Mayor Battle described the flooding from Hurricane Florence as “worse than the flooding produced by Hurricane Matthew” in September of 2016 which caused the loss of nearly 90% of the homes and businesses in the small town of some 400 residents. “We had been fighting hard to rebuild our town from Matthew when Hurricane Florence was forecast to bring a rerun of significant flooding to the town from the convergence of the Little Pee Dee and Lumber Rivers.”

The Mayor told the group that he, Ms. Rogers, town officials, employees, and the residents of Nichols had “learned a lot from Hurricane Matthew and this caused us to be better prepared this time around.”  Working with SC Emergency Management, the state’s Firefighter Mobilization program at the State Fire Marshal’s Office, Marion County EOC, Marion County Sheriff Brian Wallace and his department, SLED, local first responders, DNR, SC State Guard and the National Guard, resources were prepositioned to evacuate the town’s residents to safe locations ahead of the rising waters.  “This was a major and life-threatening event, and this could not have been accomplished without the expertise, resources and sacrifices of all of you”, the Mayor told the group.

Town Administrator Sandee Rogers also shared her gratitude to the firefighters.  “We are an isolated and poor community in Marion County, and to have you and even out-of-state swift water teams come to help us was an encouragement for which we shall forever be grateful.”  Ms. Rogers continued, “even with all of the warnings and appeals to evacuate, a number of hold-outs remained in their homes. This was determined by an extensive door to door reconnaissance prior to the arrival of the State and National Guard and performed by our Mayor and staff, with the help of DNR, and the Marion County Sheriff’s Department.  A white-board wall map was then placed in the hallway of the town hall with the locations of the hold-outs marked in red for responders to target them for the final push.”

Ms. Rogers explained that only a handful of residents have been able to return home at this point with the majority still in the long process of tearing out and rebuilding.  “We have to give our people hope for the future, so following Hurricane Matthew a Hazard Mitigation Grant was applied for to conduct a hydrology study that will reveal what measures we can take to hopefully keep this from occurring again in the future.   Little did we know that the future would come so quickly.  The grant process took over a year and a half to be awarded and to put into place.”

Mayor Battle and Administrator Rogers are crafting a corporate challenge to industry and large businesses to help raise money to assist local residents and businesses who were devastated and may require elevation during the rebuild process.  Administrator Rogers stated, “Our citizens have a fear deep within them that this may happen again. Not only is elevation required in many cases due to code requirements, elevation is also what will bring many a sense of peace following these traumatic events.”  She went on to say that “there’s nothing small-town America can’t do; we have some of the most genuine, determined, and loving people who call Nichols their home, and we cannot let them down.”

State Fire Marshal Jonathan Jones payed tribute to Battle and Rogers for their remarkable leadership and determination to protect their town and keep their citizens safe during and after the storm.  Jones told the group that “as the waters had inundated the town and were now rising within the town hall and everyone was taken care of, they and their dedicated staff were like the captains of a ship and were the last to leave the town on the back of a National Guard high-water vehicle.”

Under Jones’ management along with his team of responders, the State Fire Marshal’s Office plays an important role in statewide emergency operations and serves as the primary emergency support function for structural firefighting and urban search and rescue operations during major events.

Jones also offered encouragement to the town’s leaders and its residents by referring to the scriptures found in the Book of James where the writer speaks of trials and troubles.  Jones told them “when your faith is tested, endurance has a chance to grow, and when your endurance is fully developed, you will be strong in character and ready for anything.”

According to Tres Atkinson, President of the S. C. State Firefighters’ Association and Chief of the Dorchester County Fire Department, “Mayor Battle is quite a man whose love for his town and neighbors is reflected by his actions during the 2016 storm, Hurricane Matthew. The water rose so quickly with no warning and caught everyone by surprise.  He, the Police Chief Mark Lewis, and Sheriff Brian Wallace, along with the help of dedicated and brave local citizens, SLED and DNR were going door to door in waist deep water escorting and carrying many from their homes to safety.  Many, including the Mayor, used their personal vehicles to transport residents to the town hall where they stayed until the National Guard, DNR and first responders could boat them out the next day.”

Atkinson also said that “while Mayor Battle, the police chief, local residents and the members of the Marion County Sheriff’s Department were searching the area for those who may be stranded, Mayor Battle and the team he was with heard a faint cry for help.  An all-out effort was made to determine the location of the cry and finally by way of boat, they came upon a young college student who tried to make his way home. He was standing on the roof of his car surrounded by rising water in a remote area and no doubt terrified.  His cell phone had lost power.  The team including the Mayor made a quick rescue and brought the young man to the town hall.  Mayor Battle says he will never forget the phone call to this student’s mother telling her that her son was safe.”