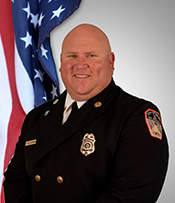 Josh was born on November 30, 1978 in Sarasota, Florida. He is married to Kimberly and they have five daughters, Brooke, Jeslyn, Jenna, Emma and Lily. The family resides in Boiling Springs.

Josh began his career in the fire service in 1998 with the Landrum Fire Department, as a volunteer. He worked as a Paramedic with Spartanburg EMS and Greenville County EMS until 2004, when he began his full-time fire service career with the City of Greer Fire Department. While serving as a career firefighter, Josh has progressed through the ranks and today serves as the Deputy Fire Chief in the Operations Division.

Josh graduated from Greenville Technical College in 2000 with an Associate’s Degree, Columbia Southern University with a Bachelor of Science Degree in 2015, and Master’s Degree from Waldorf University in 2018. He also graduated from the South Carolina Firefighters’ Associations Leadership Institute in 2013 and has served on the Strategic Planning Committee. Josh is currently in the National Fire Academy’s Executive Fire Officer Program.

Josh has served many years as an Adjunct Instructor with the South Carolina Fire Academy, been a member of the Greenville County and Spartanburg County Fire Chief’s Associations.