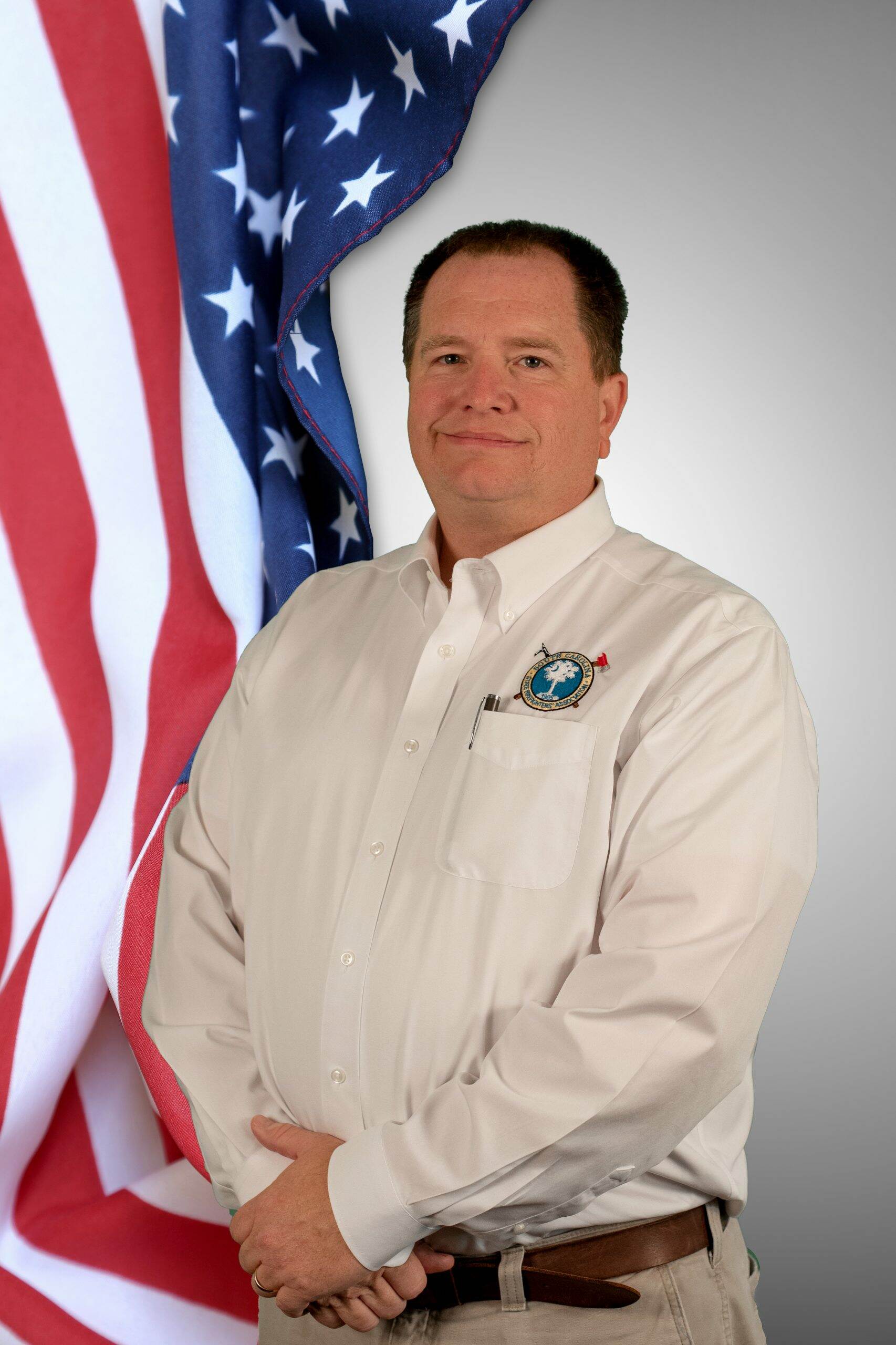 Brick Lewis was born in Columbia, South Carolina and raised in the outskirts of Winnsboro, S.C. He is the son of Crosby and Cleo Lewis, a (semi-retired) attorney/legislator and homemaker. Brick graduated high school and continued his higher education at Lander University with a Bachelor of Arts degree in Political Science. In June 2000 he married his wife Edith Ann Wells of Irmo, S.C. and they have two wonderful boys; Crosby and Wells.

He was employed by the City of Columbia for over 11 years in public safety rolls; most recently with the Columbia Fire Department before being hired as the Director of Administration for the Association in April 2018.  Brick enjoys traveling with his family or watching his youngest play for United Soccer and his oldest playing guitar and football for Chapin.  He also likes spending time in the great outdoors, whether it’s in the woods hunting or on the waters of Lake Murray.

Although Brick has stayed at a Holiday Inn he isn’t a firefighter, but he does have a bond with the fire service.  He understands the meaning of Brotherhood and wants to make a difference for the firefighters of South Carolina by keeping them informed and educated about the services, resources and training that are available to them from SCSFA.

A lot of folks are talking about online training for the fire service.  Our Fire Academy has developed several online and blended learning courses to help serve their customers.  The Association will be creating a new website to host additional online training resources in the...

President Ken Kerber is pleased to announce that Rev. Dr. Gary Rogers has accepted the position of the South Carolina State Firefighters’ Association Chaplin.  A search committee had been formed to assist with this important selection and made their recommendation last week.  Dr. Rogers is...

That was the title of Chief Shane Ray’s presentation at our Winter Quarterly Training last Saturday at the Fire Academy.  Chief Ray presented several topics that generated lots of good discussion.  One of those topics was something we’ve all been taught or heard about; “fight...

Several participants, and potential participants, have asked for definition of the process by which a person becomes qualified for distribution and the time frame that coincides with that participation. The process is governed by two entities.  Primarily, the choice of the State Trustees in the...

The Leadership Institute is meeting this weekend (Feb. 3-5, 2012) at Hickory Knob State Park located in McCormick, S.C.  This weekend, the Institute members are hearing various presentations over a three-day period.  I have listed the topics below so our readers will have an idea...

Guest post by Margi Stone Cooper, Contributing Writer On February 1, 2012, the federal government released a plan to help schools move toward the adoption of digital textbooks. The intent of the new “Digital Textbook Playbook” is to enable all K-12 students to have access to...

February 17, 2012 Dear Fire Service Personnel, Establishing and/or re-evaluating our vision and mission are important. As such, your involvement in the process is requested during one of our “Fire Service Planning” days – Feb. 23 or Feb. 25. You are invited to attend to...

from press release… Globe Celebrates 125th Anniversary by Giving 125 Sets of Gear to Volunteer Departments Eligible departments can apply at www.nvfc.org Globe has reached a milestone and is celebrating by giving back to fire departments in need.  In honor of the company’s 125th anniversary,...

From our partners at DHEC… March 09, 2012 The SC Advisory Council has approved the structure and content for each level of the EMT refresher course to include the required transitional material. Attach to this CIS announcement are two documents: EMT Basic to Emergency Medical...