Posted at 12:51h in History by Carter Jones 0 Comments
2 Likes

Out of the City of Laurens comes the sad account of a story that surely would have been lost to antiquity were it not for the recent resolve of that community’s firefighters. So, let’s go back in time to the beginning. Earliest mention of an organized force was in the Laurensville Herald dated December 5, 1884, where an article talks about the election of officers to head up the creation of what would become known as the Crescent Hook & Ladder Company. As in all villages and towns of that day, a hook & ladder company was essentially a corps of men whose primary mission was to extinguish incipient fires with buckets of water and to prevent the spread of fire to any exposures “by pulling down dangerous walls.” Usually a hand-drawn wagon of some nature was acquired to carry an assortment of ladders, pike poles, hooks attached to ropes, and axes. Laurens was no exception to the practice, and a former Greenville fireman by the name of Jerry Walton was elected to serve as Chief of the newly formed company with B. B. Hunter holding the position of Foreman. We are told the company had a membership of 31 strong.

After far too many destructive fires, pressure was put on the Town Council, both from the community as well as the local newspaper, to purchase a machine that could pump water. So, a “fine steam fire engine”, manufactured by the Silsby Company of Seneca Falls, N. Y., was finally ordered on March 30, 1887, for the agreed upon price of $3,100. The following month, the Town Council took the next step in formerly organizing a town fire department which was named the “Hector Fire Company”. It was agreed that the new steamer would be named “Lulu” in honor of a popular and lovable young lady of Laurens. In addition, the hose reel was given the name “Lieuellyn”.

The Laurens Fire Department was comprised of two companies, the Crescent Hook & Ladder whose members were predominantly “colored”, and the Hector Fire Company which had a majority of white firemen. The department became quite active in the many tournaments held around the State where fire departments competed in reel races, grab sprints, foot races, and fastest water demonstrations. For instance, in 1887, the Crescent Hook & Ladder Company received an invitation to attend a tournament to be held in Greenville on June 10th, 1887.

Recruitment of volunteer firemen for both companies seemed no problem for the Town of Laurens due in large part to an ordinance which required “all male persons within the corporate limits of the town of Laurens, between the ages of sixteen and fifty, are liable for street duty”, with only a few exceptions, ie. ministers and teachers. Mention of “street duty” is the first indication this writer has found whereby serving as a volunteer fireman was made compulsory by a local governing body.

In April of 1889, the Hector Fire Company was invited to participate in a tournament to be held in Newberry the next month on May 30th. The Laurensville Herald reported that the Hector Fire Company was “not properly organized and drilled for a contest with much older and better disciplined companies. The Company was composed of young men of business and pursuits of one kind and another, whose time was not their own; hence they had no opportunity for practice save a little while.” The article goes on by saying…”they went to work with a will, determined to attend the tournament and win a prize, if earnest effort could do so.”

With a big tournament looming in the next 30 days, the department readied their equipment and practiced when they could. One of the requirements for entry in every tournament dictated that each apparatus to be used in competitions must be weighed in order to fairly qualify to participate in each race. Now comes the tragedy that befell the little Hector Fire Company. 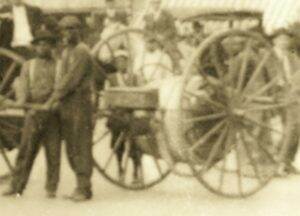 On May 27, 1889, just days before the tournament was to be held in Newberry, several young volunteers were pulling the hose reel to the large gin scales at Hudgens Spring on the outskirts of town. Accounts suggest that while the large reel was being pulled down the steep hill to be weighed, the young volunteer firemen lost control of the tongue which swerved to the right and struck a railroad bridge support. One of the young men, Thomas N. Bramlett, age 16, was crushed and pinned against the bridge support. According to reports, the lad lived seven hours and finally succumbed to his injuries. This is the only line-of-duty death ever to be experienced by the Laurens Fire Department.

Documentation is contradictory about this incident and the aftermath of the tragedy. An article written by Mrs. Edna Foy in 1987 for the Advertiser’s Mister Sun, says “following the tragedy, Laurens did not participate in such events for many years, but in recent times the department has again competed.” However, in an article written for the Laurensville Herald (date unknown), it is told that the fire department did participate in the tournament held in Newberry on May 30, 1889, and earned “a splendid victory…in the reel contest at Newberry on the 30th.” Again, on June 1, 1889, the Laurensville Herald reports “at a meeting of the Hector Fire Company, held in the Hall this day, the following preamble and resolutions were presented…and unanimously adopted: Whereas, it was our privilege to be present and to participate in the exercises of the Fireman’s Picnic and Tour the 30th day of May, at the invitation and as the guests of the Excelsior Fire Company of the City (Newberry), and to receive at their hands and at the hands of the citizens of Newberry…many kindnesses and courtesies.”

This writer can only speculate as to the discrepancies. On the one hand, the article written by Mrs. Foy in 1987 is the account told by her father when she was a child. And, the contradictory accounts are detailed in newspaper commentaries according to actual dates and events. This writer presumes the Hector Fire Company followed through with their commitment to participate in the Newberry tournament in honor of their fallen volunteer whose longing was simply to represent his town and showcase the department he loved.

Whatever happened after the incident which resulted in the death of young Thomas Bramlett we are not real clear. However, we do know that he died as a direct result of an accident while pulling the hose reel to be weighed for a tournament to be held in Newberry. Furthermore, we know he was buried in the cemetery off North Harper Street, and his burial site was lost for many years. It was not until the Laurens firefighters, under the leadership of their late Chief, Bootsie Cox, sought to locate it having only the desire to properly honor and memorize the young fireman.

After much searching, the gravesite was located, but the tombstone had been vandalized and broken into three pieces. The firefighters sought help from a local monument company in repairing the broken pieces of granite and cleaning the stone. Finally, the gravestone was firmly placed once again on top of Bramlett’s grave where it now marks the resting place of a forgotten youngster whose only legacy is service to his community as a volunteer firefighter. The epitaph reads:

My thanks to Chief Bill Hughes and the members of the Laurens Fire Department for once again bringing to light this marvelous and awe-inspiring story. I close with this quote from an unknown author: “Our good works are like stones cast into the pool of time; though the stones themselves may disappear, their ripples extend to eternity.”